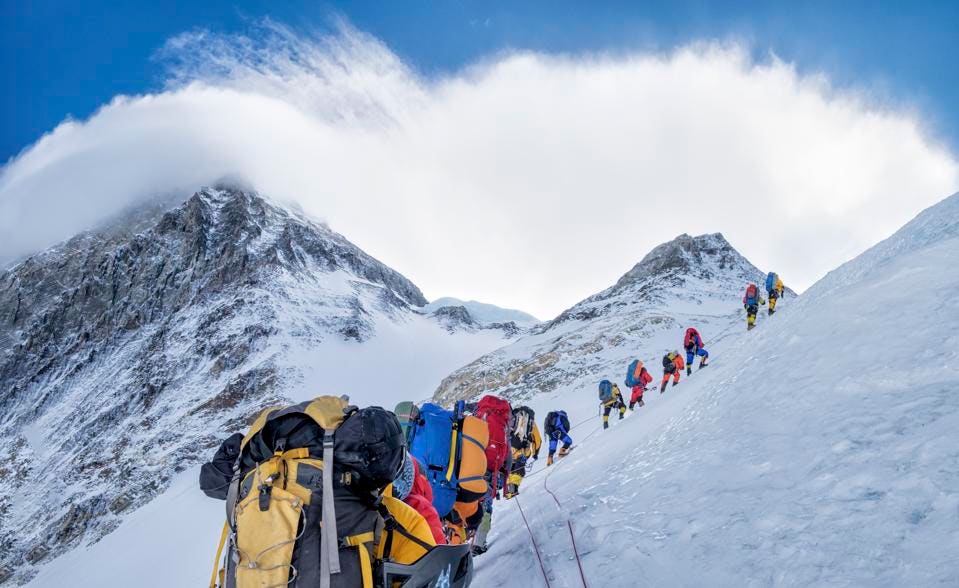 When I was a kid growing up in Brooklyn, I’d hear an occasional report of someone climbing Mount Everest. This was breathlessly described as a courageous and death-defying endeavor—only suited for brave, intrepid and professional mountain climbers. If you’re not familiar with geography, Canarsie, Brooklyn is not known for its majestic mountain ranges, so I really didn’t give it any additional thought. The closest thing we had to a mountain range was the distant view of the Twin Towers looming large in Downtown Manhattan, which could be seen on a clear sunny day.

Fast forward to this week, I read a few articles detailing the recent deaths of 18 people in their efforts to climb Mount Everest. I was surprised to learn that climbing Everest is now a popular tourist attraction. It seems that the Nepalese government—where Everest is located in the Himalayas—encourages climbers, as it is a major revenue source for the relatively poor country. There are few requirements asked of the prospective climbers; passes are liberally given to people without inquiry into their health, abilities and relevant experience.

Lower costs and minimal restrictions have made Everest the new cool fad for wealthy weekend-warrior types. It’s the perfect place for Instagram selfies and bragging rights to top their pretentious friends and co-workers. To put things into perspective, in 1977, only two people reached the summit. In subsequent years, over 300 people have died attempting to reach the pinnacle. Where it used to be a lone intrepid climber (along with a trusted Sherpa), now Everest literally has traffic jams of people. Long lines of trekkers have caused pushing, jostling and shoving at outrageously high altitudes. People are stuck in line for hours. The air thins and oxygen and supplies dwindle. The lack of water, food and oxygen, coupled with the high altitude, treacherousness of the mountain and overcrowding has resulted in numerous deaths.

This is a sad allegory for our careers and professional lives. We tend to exhibit a herd mentality and are quick to jump on the latest bandwagon. As a parent of college-aged children, I notice parents pushing their kids to major in engineering and computer science, believing that these are the only two paths to making a handsome respectable living. The sad part is that a large percentage of these kids have the faintest interest in these majors nor are they blessed with the requisite innate aptitude in math and science. I’ve heard a number of these kids becoming miserably unhappy and dropping out or switching schools.

We all know adults who have pursued careers that they hate, but felt pressure to remain. They become addicted to the financial remuneration and lead lives of quiet desperation. Due to societal, familial and peer pressure, we choose jobs and careers that we don’t enjoy or derive any meaningful satisfaction. These professions become oversaturated and it backfires on many entrants to the fields. The legal profession has become so crowded that only a small fraction of people can earn the coveted big-law partnerships that were promised.

This is a trend that happens in many other areas too. The stock market is on fire, so everyone jumps in to buy the next hot stock. History shows that they tend to always buy at the top and when the prices drop, they panic and sell at a loss. Bitcoin looks like the next best way to become rich. Fear of missing out pushes people into buying it at 20,000 per coin and those that bought at pennies were happy to sell it to them.The price subsequently plunges dramatically. In my leafy suburban New Jersey neighborhood, the self-service yogurt store was a craze. Six yogurt shops opened in the quaint downtown district, a couple of ice cream stores installed yogurt dispensers and other restaurants joined in. They couldn’t all survive. We now have one left. It’s off the beaten path in a lower-cost location.

On a personal note, after attempting prestigious jobs and careers and failing at everything, I fell into recruiting. My focus—compliance, audit, regulations, corporate governance and risk—was mocked and derided. It was viewed as a backwater area of Wall Street that others turned their noses up at. I figured that there would be less competition, since it wasn’t deemed glamorous or sexy. The area become blazing red hot with new regulations in response to widespread scandals. Business boomed and grew exponentially for years, as other recruiters continued to avoid it because of its “boring” nature. At its height, every recruiter became a compliance headhunter. Then, a new president took office and his administration called for deregulation. The banks did not see the need to hire as much, so they started making job cuts. Most recruiters quit the business or left to pursue the next hot fad.

The lesson I’ve learned is to choose the path less traveled. Don’t follow the herd up a mountain to your peril. Don’t buy stock or cryptocurrencies just because everyone else is doing it. Find your own career path that’s right for you. Think of what you’re good at, where your skills best lie and what exactly you enjoy doing. Then, go for it! Don’t worry if nobody else is going down that path. Let everyone else buy stock at the all-time highs, open the tenth frozen yogurt store in a small town or go into a profession that offers riches, but makes them miserable.

Find your own mountain to climb that nobody else knows about, so that you’ll be special, unique and will succeed against fewer competitors.