The Indian rupee has been depreciating since the first week of July and in the last eight weeks it lost almost 4.3 percent against the dollar. A moderating GDP growth is clearly visible due to both domestic and global factors. A number of reasons are responsible for such a drastic fall ranging from domestic growth to FII outflows and Yuan deprecation amidst the trade war.

India is not directly affected from trade tensions between US-China, but we cannot completely rule out a possibility of a slowdown in Asian economies from a worsening trade war. The government and RBI are in full action mode to prevent slowdown in the economy. The Indian rupee is heading towards its worst monthly losses in six years, and some more pain can be seen in the months to come. 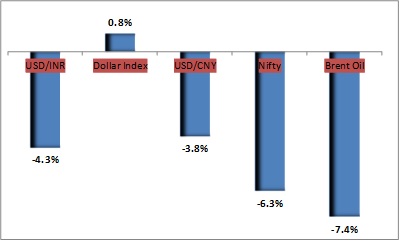 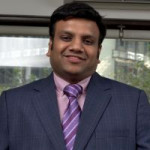 Key reasons behind recent fluctuations in the Indian currency:

The falling GDP growth rate is one of the major reasons behind a fall in the domestic currency. According to a FICCI survey report, the Indian economy is projected to grow 6 percent in the first quarter and might grow to 6.5 percent in the second quarter. It is also projected to remain below 7 percent for the entire financial year. Indian economic growth was about 8 percent in FY 2015-16 and 7.5 percent during FY 2014-15.

In a recent RBI policy meeting minutes released a week earlier, the central bank sounded more dovish seeing the current economic situation. The RBI lowered key interest rates by 35 bps for a fourth straight meeting with a slightly bigger than expected cut. Later on, RBI decided to transfer a record high surplus reserve of INR 176,051 crore to the government to boost the fiscal position.

FII outflows could be the primary driver of a weakening Indian currency. We have seen more than Rs 31,000 crore of outflows since July 1 (till August 30). Foreign institutional investors sold Indian shares in the months of July and August as the government announced an income tax surcharge in the budget speech on July 5 for people earning more than Rs. 2 crores a year. It has impacted 40 percent of FPI directly and hurt the market sentiments. Only in the last week, the government came out in support of FPI’s and removed this tax surcharge, but the damage had already been done by then.

Mirroring weakness in the Yuan which fell to more than 11 year levels of 7.165 this week, most Emerging Asian currencies came under pressure, including the Indian rupee. The Yuan lost nearly 3.8 percent in just eight weeks. The depreciation of the Chinese Yuan and an appreciating US dollar will keep the rupee under pressure in the coming month. Yuan deprecation is mainly due to escalating trade war between the US and China. China’s Ministry of Finance announces to apply new tariffs between 5 percent and 10 percent on $75 billion worth of goods in response, while President Trump tweeted last week to boost tariffs on $550 billion in Chinese imports in retaliation.

Weakness in oil prices is limiting the rupee losses

The Indian rupee is receiving support from falling Brent oil prices, which lost nearly 7.4 percent since the first week of July. However, volatility remains due to geopolitical issues related to Iran, OPEC supply measures and US crude oil inventories. However, oil prices may remain weak on poor demand outlook as manufacturing activity across the globe is falling. The US Energy Information Administration lowered its oil demand outlook for 2019 to 1 million barrels per day which is lowered by 70,000 bpd. If crude oil prices fall further from current levels, we may not see much decline in the rupee as India imports nearly 85 percent of its crude oil requirements and a $1 fall in oil prices saves nearly $1 billion as regards the import bill.