Beauty stocks are turning heads as some of the marquee names in the space notch double-digit gains this year.

Coty, Ulta, Estee Lauder and e.l.f Beauty have gotten a boost as the cosmetics industry has benefited off the exponential rise in consumer confidence. Coty is the top performer, up more than 70 percent and on track for the best month in its history.

Cosmetic sales have also seen a boost as the surge in millennial usership on popular social media platforms such as Instagram and Twitter has helped companies promote and respond to their core consumers.

“Consumers are becoming more vocal and have more of a say in products, especially in social media,” Alison Gaither beauty analyst at marketing research company Mintel, said in an interview. “Brands are responding and that’s something they weren’t able to do before.”

According to one technician, the charts suggest the trend in the broader consumer space still has more upside ahead. 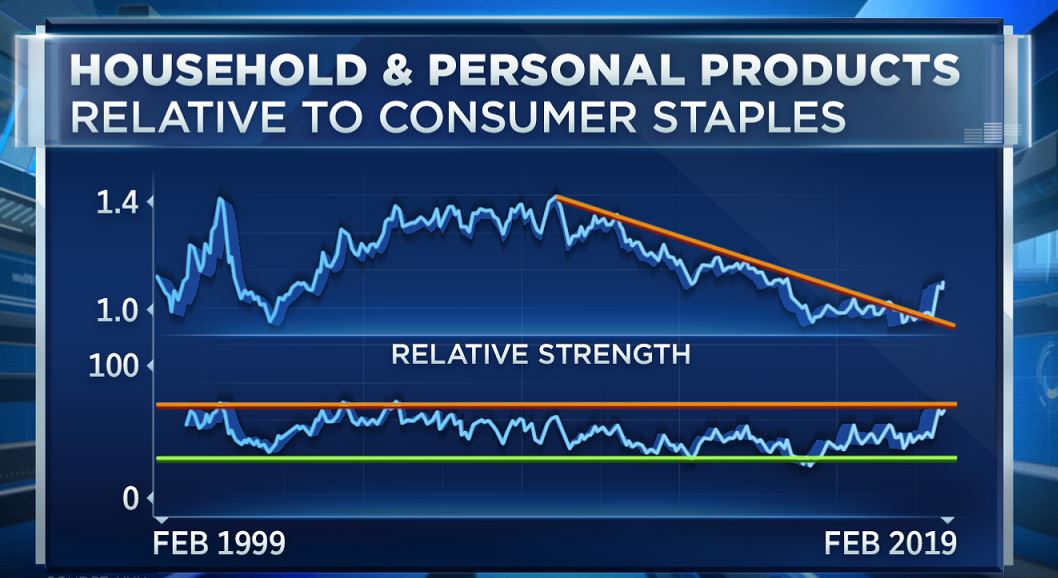 “They’ve had a pretty substantial run but you look at things like the S&P household and personal products index recently [they] have just pushed onto a new all-time high,” Mark Newton, founder of Newton Advisors, said Wednesday on CNBC’s “Trading Nation.” “So it’s really more of a secular longer-term breakout in my opinion.”

Newton’s charting reveals that relative to the broader consumer staples sector — which is flat on the year — the household and personal products sub-industry has “broken out of nearly a 10-year downtrend” and is a good defensive play for investors looking to trade the space.

“You know you want to be in the staples and household and personal products specifically looks to be an interesting area to really be in as part of this group that can show to leadership,” Newton said.

“We are not seeing any bearish flow, it’s more somewhat profit-taking here,” she said Wednesday on “Trading Nation.”

Additionally, Gilbert noted that while Coty still holds potential for long-term investors, special interest of late has been boosted by the tender offering announcement from investment firm JAB Holding earlier this week.

“It seems as if there is potential longer term, but shorter term via the options I would say investors are positioning for potentially a pullback or at least worst-case scenario is just a breather here,” she said.

The beauty stocks were mixed Thursday with shares of Coty, e.l.f Beauty and Ulta all up slightly, while Estee Lauder was in the red.