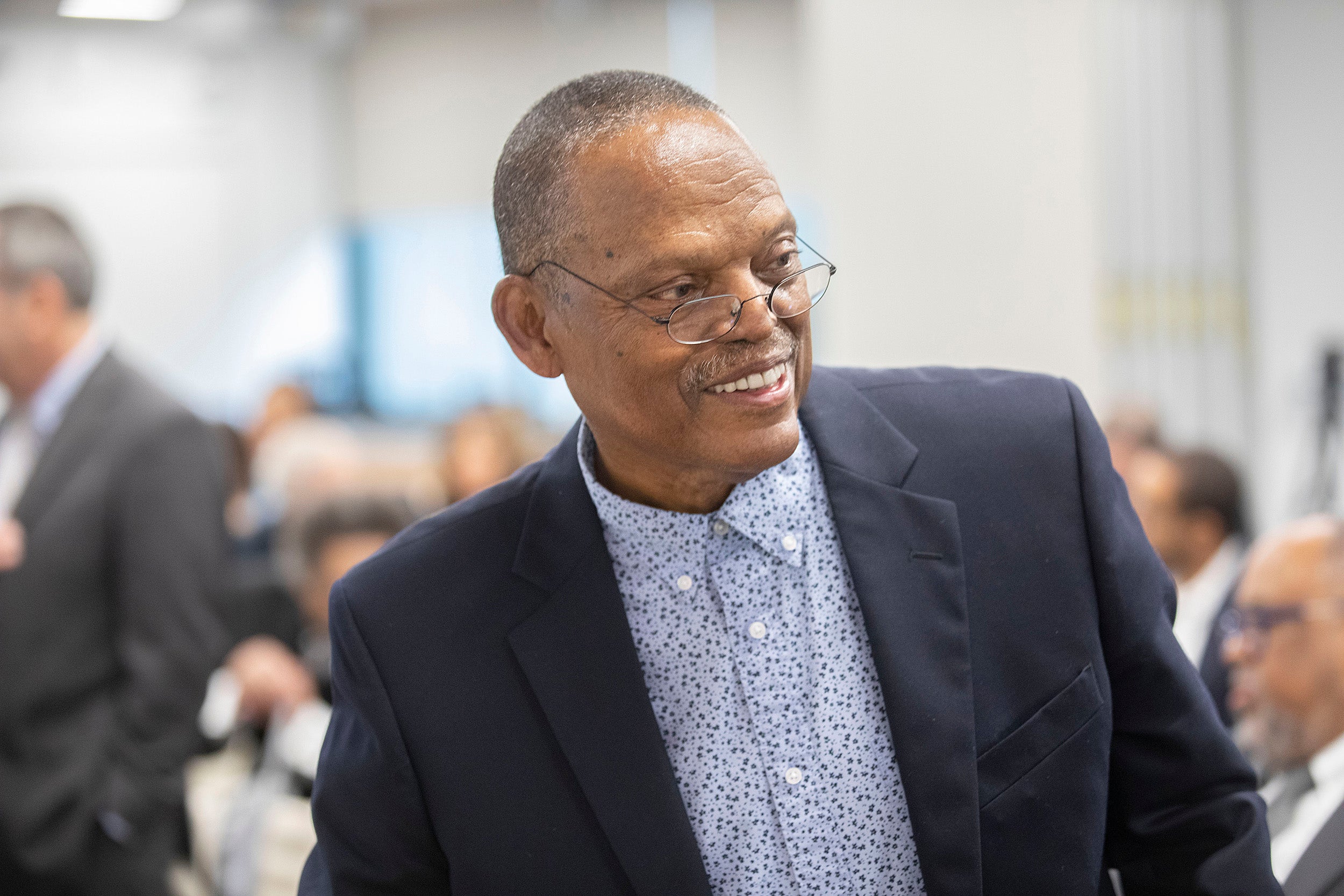 To follow the career of William Julius Wilson is to trace the evolution of the national conversation on race and class in America over the past half century.

That was the overarching theme of the first full day of a three-day symposium celebrating the career of the Lewis P. and Linda L. Geyser University Professor Emeritus at the Knafel Center on Thursday.

“One of the great functions of the University is to be a loving critic of society and of our country. Few people on our faculty have done that better,” said Harvard President Larry Bacow of Wilson, a MacArthur Prize Fellow who joined the Harvard faculty in 1996. “You have held a mirror up to our society. You have asked the toughest questions. You have challenged us as a nation, as a society, as a community to be better.”

Bacow joined Edgerley Family Dean of the Faculty of Arts and Sciences Claudine Gay and Dean of Social Science Lawrence D. Bobo in praising the eminent sociologist before a capacity crowd.

The Thursday-morning program began with a panel on “Race Relations/Inequality in Historical and Contemporary Perspectives” chaired by Mary C. Waters, the John L. Loeb Professor of Sociology. Panelists began with tributes and personal stories before engaging in a discussion of Wilson’s work.

Jennifer Hochschild, the Henry LaBarre Jayne Professor of Government and professor of African and African American studies, tackled the questions raised in Wilson’s 1978 book, “The Declining Significance of Race: Blacks and Changing American Institution.” Looking at the book’s central assumption, Hochschild focused on context, asking, “Compared to what?”

Hochschild pointed out that in political terms, yes, issues of race appeared to be declining. The number of African Americans in Congress is increasing, as is white support for selected principles of racial equality, such as interracial marriage, candidates of color, and job access.

However, she pointed out, in other ways race remains an issue. For example, although the number of Latinx eligible voters is rising, the number of Latinx voters is barely moving. In terms of state and federal incarceration, African Americans make up the greatest percentage by far. Although there has been some improvement, she noted that the overwhelming number of prisoners are young, poor African American men.

Hochschild then turned the discussion to perception of race by displaying the results of a survey that asked whether a series of statements were racist. The respondents, who defined themselves along a liberal-conservative spectrum, rated comments about a border wall, integration, and the election of Donald Trump, among others. Hochschild said the results told her that “a large percentage of the American population just doesn’t see it.” Her conclusion was that while the importance of race is declining in some ways, largely thanks to demographics, in others it has increased.

Orlando Patterson, the John Cowles Professor of Sociology, focused on two of Wilson’s books, his first, 1973’s “Power, Racism and Privilege: Race Relations in Theoretical and Sociohistorical Perspectives,” and his most recent, 2009’s “More than Just Race: Being Black and Poor in the Inner City.” Patterson said the first “draws brilliantly on history,” while the latter “probes deeply into the inner devastations of class and race oppression.”

Arguing for the importance of history and historical context, Patterson talked about the dual nature of oppression and racism.

“There can be no serious study of racial oppression and inequality without fully recognizing that oppression works its evil in two ways, not one,” said Patterson.

“There are the exterior structural brutalities of oppression and racism,” he said, naming unemployment and ghettoization as examples. “But we also know that 250 years of the social death of slavery and another century of the neo-slavery of Jim Crow … leave internal scars,” such as the “fragility of social relations,” as well as rage, hunger “not only for bread but for security,” and deep mistrust.

Patterson pointed out that Wilson was raised by a single mother in poverty and understands the complex nature of these issues in a way that many in the field do not. Only by again broadening the field to include study of race and class issues in other countries can sociology make itself relevant, he said.

New York University historian Thomas Sugrue, Ph.D. ’92, began by discussing the narrow-mindedness of his own field in the 1980s, when he first discovered Wilson’s work. Historians then were discouraged from studying sociology, or any other seemingly related work. However, Sugrue fell hard for Wilson’s works, which he recalled discovering in a Harvard Square bookstore while pursuing his doctorate here. In particular, he was inspired by Wilson’s 1987 “The Truly Disadvantaged: The Inner City, the Underclass, and Public Policy,” which he credited with shaping his own writings on work and the changing urban economy.

Sugrue did note some flaws in the book’s approach. While Wilson dismissed simplistic early notions of African American society, he said, they both accepted a sexist view of gender roles in work. As a result, they both missed the importance of the movement of African American women into public service jobs, and how the elimination or downgrading of these jobs would affect society.

“We need a more comprehensive study of class and race,” Sugrue said. But he said that even with its flaws, Wilson’s work laid the groundwork.

Wilson briefly responded at the end of the session, noting that he agreed with the panelists’ major points. Responding directly to Hochschild, he said that his book had anticipated the changes she discussed. Economic class has become more important than race in some ways, he said, while the center of racial conflict has shifted from the economic to the socio-political sector.

While thinking on race and class in American culture has shifted over time, the panelists agreed that Wilson’s work has both reflected and helped shape it. “Bill always wrote with a public audience in mind,” Sugrue said. “He always wrote that informed scholarship is necessary to engage on the important issues of our time.”