The USD/INR, trading in a narrow range from last few weeks, have finally given big move on the back of Federal Reserve commentary. The Indian Rupee depreciated 0.82 paisa on weekly basis to finally close at 69.70. The currency pair is trading with the series of lower tops and lower bottoms and this cycle is still intact but the last week move suggesting that short-term pain is still left in the rupee.

For the last four months, the USD/INR is respecting the declining trend line but the long green candle of August 2 session has breached the resistance of trend line and closed above it. The 20-day moving average curve has started sloping upwards, which is indicating that downside for the US dollar has matured in the short term.

Momentum indicators also suggest some buying interest that might come in the currency pair. The RSI on the daily chart was trading in a sideways zone since April 2019 and now has given the first sign of trending move in days to come. For the upcoming week, the recent up move in the dollar can extend up to the recent swing top of 69.98 and if its get traded on higher side, the rally can be propelled till 200-day moving average (DMA), which is placed at 70.17. 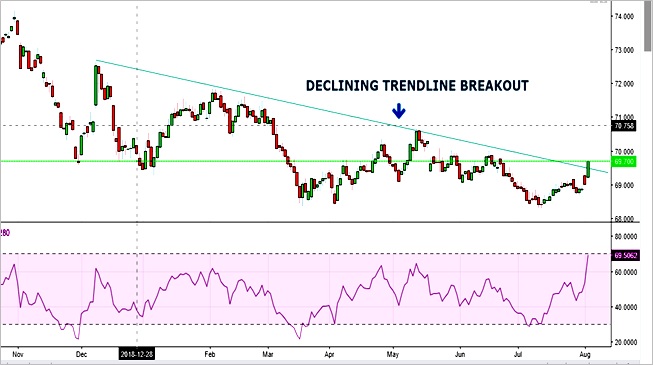 The US dollar rallied not because of the rate cut but due to change in the stance to “Hawkish”. Fed chairman Jerome Powell mentioned that rate cut was “mid-cycle adjustment”, and not the beginning of the cutting cycle, making it clear that the Fed will not cut the rates in short to medium term,  something that was not expected . As a result, the dollar gained its charm again attributable to “Higher Interest Rate Strengthen the Currency”. So at least in the very short term, we can expect the USD/INR to trade with positive bias and traders should place themselves on the long side.