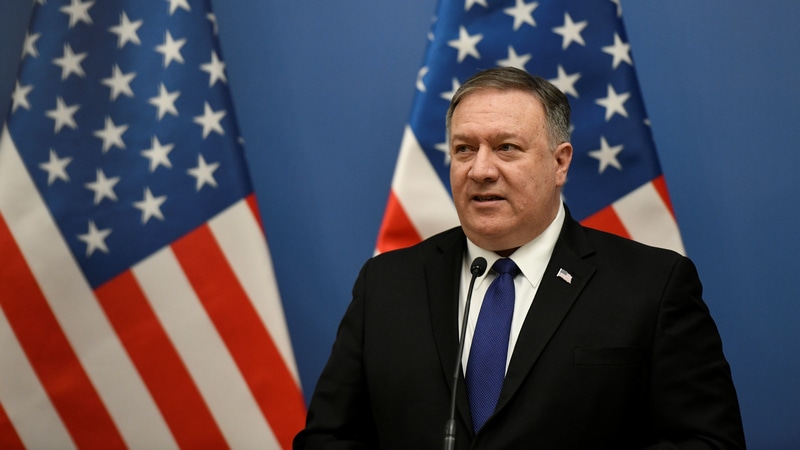 US Secretary of State Mike Pompeo

The United States may be forced to scale back certain operations in Europe and elsewhere if countries continue to do business with the Chinese telecommunications company Huawei, Secretary of State Mike Pompeo said Monday in a new warning that underscores US concerns about the firm. In Budapest on the first leg of a five-nation European tour during which he is raising American concerns about China and Russia’s growing influence in Central Europe, Pompeo said nations would have to consider choosing between Huawei and the United States. The warning was broad but pointedly delivered in Hungary, a NATO ally and European Union member where Huawei is a major player.

“They are a sovereign nation,” Pompeo said of Hungary. “They get to make their own decisions. What is imperative is that we share with them the things we know about the risks that Huawei’s presence in their networks present — actual risks to their people, to the loss of privacy protections for their own people, to the risk that China will use this in a way that is not in the best interest of Hungary.”

The US has been warning countries about the risks of Chinese telecom technology as governments choose providers for the rollout of “5G” wireless Internet, which will enable faster download speeds but also greater connectivity among devices.

Pompeo says the presence of Chinese telecom infrastructure could drive a technological wedge between the US and some allies.

Pompeo said he had raised the concerns with Hungarian Foreign Minister Peter Szijjarto and would also do so with nationalist Prime Minister Viktor Orban, who has been criticized for seeking closer ties with Russia and China and for increasingly authoritarian rule at home.

“We want to make sure we identify (to) them the opportunities and the risks with using that equipment. And then they will get to make their decisions,” Pompeo said.

The US has repeatedly accused China of using technology to pilfer trade secrets. China recently has said that it’s “totally unreasonable” to make some of these accusations and that the US is just trying to suppress a rising competitor.

At a news conference with Pompeo, Szijjarto acknowledged that Huawei is present in Hungary but played down its position in the market. He also made the point repeatedly that Hungary accounts for only 1.2 percent of European Union trade with China.

“This does not endanger us from being an ally,” Szijjarto said.

Pompeo will take the same message about Huawei to his next stop, Slovakia, on Tuesday, before heading to Poland, where he will participate in a conference on the future of the Middle East expected to focus on Iran. He will wrap up the tour with brief stops in Belgium and Iceland.

Pompeo said he hoped to reverse what he called a decade of US disengagement in Central Europe that created a vacuum Russia and China have exploited. Over the course of the past 10 years, he said, Russian President Vladimir Putin and Chinese leaders have become much more aggressive in the region and made inroads.

“We must not let Putin drive wedges between friends in NATO,” he said, adding that he had also warned of “the dangers of allowing China to gain a bridgehead in Hungary. Russia and China are authoritarian powers who do not share our joint aspirations of freedom.”

President Donald Trump’s administration has made a point of reaching out to Orban, who shares Trump’s strong stance on limiting migration and has adopted increasingly authoritarian measures, including cracking down on the opposition, labor unions, independent media and academia.

The administration of Trump’s predecessor, Barack Obama, had largely steered clear of Orban, who won a third consecutive term last year in a campaign based on anti-immigration policies and whose policies have been met with street protests and deepening concern within the EU.

Pompeo put the blame for much of the backsliding on a lack of US engagement.

“I think for a long time we shunned them in a way that drove them to fill the vacuum with folks who didn’t share our values,” he said. “The Russians and the Chinese ended up getting more influence here, they do not remotely share the American ideals that we care so deeply about.”

Pompeo was given a list of concerns in a meeting with Hungarian civic leaders. Some of their groups have been targeted by legislation making their work more difficult, like a tax on funds received from abroad and the possible jail time for those convicted of aiding asylum seekers. Three groups that took part said they believed Pompeo would bring them to Orban.

“The meeting and the openness to the opinion of the civic groups again demonstrated that the American leadership is committed to the defence of the values of the rule of law and the role of civil society,” the groups said in a statement.

Last month, Orban said he wanted “anti-immigration forces” to become a majority in all European Union institutions, including its Parliament and the EU’s executive Commission, and predicted that there would soon be two civilizations in Europe — one “that builds its future on a mixed Islamic and Christian coexistence” and another in Central Europe that would be only Christian.

Orban’s government has been targeted for criticism, including from the U.S., for forcing a Budapest-based university founded by billionaire philanthropist George Soros to move most of its programs to Vienna. His fiery rhetoric against migrants and refusal to join a new European Union public prosecutor’s office focusing on fraud and corruption have also raised concerns.